Today was a 'busy' day, taking care of business for our future travels. We started with an early morning Skype (aborted), then FaceTime with a potential housesit in central France. Two sweet little rescue Westies and a couple of barn cats. It looks pretty nifty. We're in the running with another couple. We should know by the end of the week.

Then there was the posted sit right close to home, this one in a section of Victoria known as the Gorge. Lovely area right along a tidal outlet. Looks good for that one, too.

And, finally, we decided to fix our flight times and work around them if necessary. Our wonderful travel agent, Lori, came through as usual with some great deals.

In the between times, I tried replaying yesterday's cliffs: 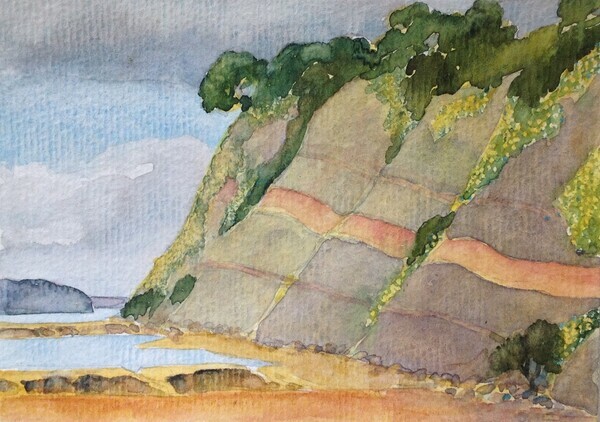 I think I may be spinning my wheels, painting-wise. Maybe if I just keep trying to push things, I'll eventually break out of this rut.

Today's tidbit has nothing to do with New Zealand. It's about France. We gave up on our Skype with the French homeowners because we had such a terrible connection. We could hear only about a third of their side of the dialogue, and the image was lousy. The homeowner suggested switching to FaceTime. We did, and we had a nice, clean, clear conversation. She told us that France rather disapproves of Skype (apparently because they can't really eavesdrop very well), and so Skype doesn't work very well in France. Interesting... Big Brother is watching and screwing things up, too.