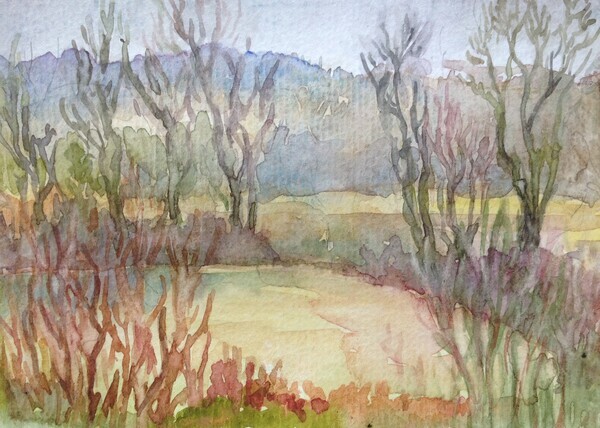 (as seen from the one good window for painting)

Here it is, already the end of the year. And I have been extremely remiss in not keeping up this blog. My only reason - though no excuse - is that I haven't been doing the paintings to illustrate my blog. In my defense, I can only say that it's not always easy to find a subject or a warm, bright enough place in which to paint.

After Anderson Island, we did a couple more sits, one in Victoria, BC, and one in Port Ludlow, WA. A solitary, lovely, lonely, bored cat in the first, and a sweet but rather dumb dog and two great cats in the second. From a tiny apartment with one pot and one pan, to an architect-designed waterfront home with more mod cons than anyone could possibly need. From city streets to the second-growth of northwestern Washington. Unfortunately, neither particularly great for walking.

After a mad dash back to Victoria, we were off to the UK. So here we are in Wales, at least for another couple of days. The trip here was relatively uneventful. Though every leg of the journey ran overtime, we still somehow managed to make all our connections and find ourselves climbing off a bus in Bridgend/Sarn, Wales. There we were greeted by Hayley, a bubbly, sweet woman who bundled us into the car and back to her amazing home in the countryside. The house is like something out of a movie - part of a 1,000-year-old monastery, complete with stone walls over two feet thick (impermeable to Wifi, so there need to be separate routers for different areas of the house), tiny windows, and even an 8th-century crypt. Over the next couple of days we got to know the family - the podiatrist father, the teacher mother, and the two delightful young teenage daughters. They had already garnished the house for Christmas, complete with decorated tree, numerous crêches, dozens of twinkly lights, and a huge herd of stuffed reindeer all the way up the staircase. After the family flew off the the wonders of South Aftica, there were just us and the zoo: two dogs, two cats, three guinea pigs. To put things mildly, they have kept us hopping. We take the dogs for good long daily walks, share the bed with the kitties (sometimes I can barely turn over), and keep hoping to really get to see the guinea pigs before we leave.

So, as the year winds down, how has it been, this housesitting gig? Well, there has been a very steep learning curve - not so much about animals as about our interactions with them. We ended up growing quite fond of them all, even the pets that we didn't warm to at the beginning. Others just slowly wormed their way into our affections until it was quite painful saying goodbye. We've seen some very nifty places, though never as thoroughly as we expected or hoped. This mainly has to do with the huge responsibility of caring for someone's beloved pets and houses, and also the cost of travel.

We still have three more sits, all in France. We're looking forward to them, but once all of our obligations are fulfilled, we'll be very happy to return to BC and make a home for ourselves back there. Alone. With no animals, at least for a while.

The Welsh seem to love their dogs. Everywhere we go, be it the beach and dunes at Porthcawl or the trails at Bedford Park, we run into owners proudly escorting their pups. They don't seem to mind when Dex and Pic, our two rather exuberant pooches, come running up to greet them. In fact, they seem to relish the attention of someone else's dogs. Unfortunately, however, a large number of the owners do not pick up after their charges, and consequently we also run into dog bombs all over the place.